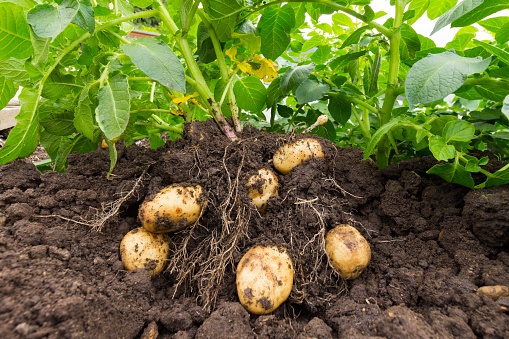 Potatoes are hugely versatile and a staple ingredient of many meals in one form or another – boiled, mashed, chipped or baked. Potatoes are classified as being either earlies or maincrops. Early varieties are ready to harvest much sooner than maincrops and are what we call ‘new potatoes’. Maincrop varieties are in the ground a lot longer. They have a better yield and produce larger potatoes.

Potatoes are grown from special ‘seed’ potatoes (also called tubers). These are just like potatoes you buy from the supermarket, but they’re certified virus-free. Buy seed potatoes from late winter onwards. You start them off indoors by setting them to sprout, before they are planted.

It’s important with earlies and a good idea with maincrops to ‘chit’ the seed potatoes first before planting; this means allowing them to start sprouting shoots. Stand them rose end up (the rose end is the one with the most small dents in the skin, or ‘eyes’) in egg boxes or similar in a light, frost-free place. The potatoes are ready to plant when the shoots are about 3cm (1in) long. On early potatoes, rub off the weakest shoots, leaving four per tuber.

When growth emerges, start the process of ‘earthing up’. Wait until the stems are about 23cm (9in) high and draw soil up to the stems creating a ridge about 15cm (6in) high. As the stems grow, repeat the process. The final height of the ridges will be about 20-30cm (8in -1ft). Earthing up protects newly emerging foliage from frost damage. It also protects the developing potatoes from light that turns potato tubers green. Green potatoes are poisonous.

Keep crops well watered in dry weather; the vital time is once the tubers start to form. Maincrop potatoes benefit from a nitrogenous fertiliser around the time of the second earthing up.

Follow these guidelines for planting times of seed tubers:

This varies slightly depending on where you are in the country. If you are planting in containers, start even earlier.

Potatoes need a sunny site away from frost pockets – the newly emerging foliage is susceptible to frost damage in April and May. Prepare the ground the previous autumn or winter by digging in organic matter such as well-rotted animal manure.

First early potatoes should be ready to lift in June and July, second earlies in July and August, maincrops from late August through to October.

With earlies, wait until the flowers open or the buds drop; the tubers are ready to harvest when they are the size of hens’ eggs.

With maincrops for storage wait until the foliage turns yellow, then cut it and remove it. Leave for 10 days before harvesting the tubers, leaving them to dry for a few hours before storing.